Meet US Open Judge 2019 Jorge Pires
I am 51 years old and a pre-retired Paratroop Lieutenant Colonel.

I started competing in Agility in 1996 with my Portuguese National Breed, Fila de S. Miguel, Kendo. In 1997, I also started competing with my dog Anushka, who was also the same breed but as fast as a Border Collie that rapidly reached the top quality of an Agility Dog. However, due to my work and several international military assignments, my agility handling career was interrupted more than I wished affecting negatively my agility career.

I have been a Portuguese International Judge since 2002. My judging experience includes many Portuguese Championships, many events wide Spain, Netherlands, Belgium, Sweden, France etc. I judge some important championships also like the WAO 2016 in England, the International Border Collie in Check Republic 17, Great Britain Agility Team Squad Performance Weekend 17, the British Agility Championships 2017, The Gasahoppet Championship 2018 Sweden, the CSJ Open 2018 in England and the PAWC/IMCA 2018 in England.
As an Agility Judge, I try to be the most comprehensive to the dog’s and handler’s safety, I like to combine a respect for all the work a handler puts in with his dog as well as the effort the dog carries out to please his handler as team-mates at the high levels of competition and I try to ensure a safe journey for all within the rules of Agility competitions 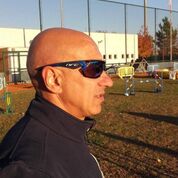